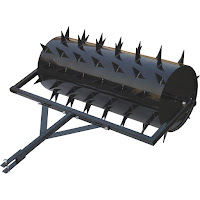 Plug and spike aerator is a tool used to loosen compacted soil by penetrates it, allowing vital nutrients to penetrate the soil. Aerating gives grassroots better access to oxygen and increases the ability of your soil to hold water. Aerated spikes use rollers with solid tines to thrust the soil and create space for air and water. While Plug or core aerator uses hollow tines to remove the soil, leaving a small opening in the soil.

The way you aerate the lawn, either by a spike or plug aeration, can affect the health of the grass. Spike and plug aerator do the same task; However, there are differences in effectiveness and advantages and disadvantages between the two tools that lawn owners can consider.


There are several types of aerator that can be used, plug or spike aerator, each of which has their own advantages and disadvantages. Plug Aerator works by pulling out some soil and leaving a large hole to loose soil compaction. Another benefit of the larger holes is that it allows rainwater to enter and keep it in the ground, also allowing for grass seeds and clippings to enter the ground. Some of these are the advantages of an aerator plug. While the lack of plug aerating requires more work than spikes aerating.


Spike aerating is a good method even though the holes are produced is shallow. As grass seeds will settle when sowing on sloping surfaces, this is useful if you intend to overseed. Spike Aerator helps air circulation and good water absorption. While the disadvantage of spike aerating is that you have to do it more often and because it makes a hole by push the ground and doesn't pull it out, causing the soil to become compacted. If you work in areas with high traffic you should choose the plug aerating method. The above are choices you can use, each of which has a positive and negative. Choose the best works according to the conditions of your lawn.

Factors to consider when choosing the type of aerator


Before deciding on a spike or plug aerator when aerating the lawn, you can consider the following points.


Spikes and plug aerator is lawn equipment used to reduce the negative impact of the compacted soil on your lawn. Soils with heavy clay content are more likely to be compacted, limiting the ability of grassroots to access oxygen. Plug aerator is more effective at reducing density in soil with heavy clay. While the solid tines used in the spike aerator cause the clay to be denser when they push into the ground. You can find out if the grass has heavy clay by squeezing lumps of damp soil in your hands. If the soil compresses into the lump, it is clay. If the soil ruins is high in loam and sand which more benefits if you use spike aerator.


Plug Aerator works by removing soil from the grassroots zone. This process improves the structure of your soil in the long run but puts stress on the grass in the short-term. The best time to use an aerator plug is during the active growing season of grass. The best time to aerate cool season grass such as bluegrass, fescue or rye-grass is during the early spring or autumn. Warm-season grasses include bermuda, buffalo or zoysia grass, which do best when they are aerated during late spring or early summer. Spike Aerator has little impact on the health of the grass and is suitable for all time of the year.

Best Sod Plugger
Core Aeration vs. Spike Aeration
The Best Ways to Choose a Manual Plug Aerator Or Core Aerator
When And How To Use A Plug Aerator
Best Manual Lawn Aerators
Next Post Prev Post