Why Does My Lawn Mower Blow Out Black Smoke & Now Doesn’t Start?

- May 27, 2020
Users of lawn mowers often face the problem of black smoke coming out of their mowers which not only causes pollution in their surroundings but also restricts their ability to trim their grass/lawn according to the planned schedule. While some people say that after giving out black smoke it keeps on working properly, others suggest that their mowers stop working after throwing out rings of black smoke for a long period of time. 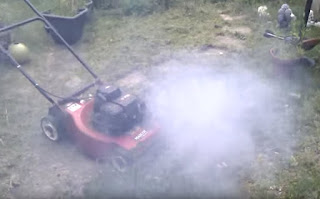 There are basically two reasons for this behavior of the lawn mower, either the gasoline to the air ratio is a lot i.e. the mower consumes much more gasoline as compared to the air, during mowing operations or an indication that oil has reached inside the cylinder and the mower is making efforts to burn the oil along with the fuel present inside the cylinder.

How to fix black smoke on lawn mower