Army Worms In Your Lawn

- May 28, 2020
Army Worms which infest our lawns are not a worm at all but are instead the caterpillar of a moth. They are around 1 to 2 inches in length, and their life cycle involves feeding on grass blades and sometimes even the roots and crowns of the lawn during the night and hiding amongst the turf during the day. Army Worms are most noticeable in the Spring, Summer, and Fall, however, it will be best to try and hunt for them during their two most prominent times of the year when they are thriving, and this will be once in June and then in August. 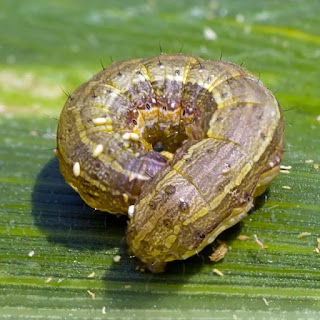 
The first time we may begin thinking we are having an Army Worm problem is usually when we live in an area that is well known for it’s Army Worm infestations and we begin noticing those familiar patches of our beautiful lawns are now looking brown and damaged. Large areas of the lawn will continue in the size of damage which is noticeable until we have to go out onto the lawn on our hands and knees to become a detective and find the cause.

The first method of identification involves looking down into the thatch layer of the lawn and close to the soil during the daylight. Army Worms will cover themselves in a light silk cocoon during the day inside the lawns foliage. This same web-like cocoon can also be seen in the dew in the early morning while moisture is still evident on the grass.

Another noticeable trait of Army Worms is their pattern of damage is unique, as they usually start at the edge of a lawn and travel in a straight line slowly consuming the lawn as it feeds, and often leaving an appearance of silk or spiderweb-like substance over the lawn.

The final method of determining Army Worm is to fill a bucket with soapy water which is mixed up with some dishwashing liquid, this soapy water is then poured from the bucket over an area of the lawn suspected of having an active Army Worm infestation. Once the soapy water is poured over the lawn you will notice the Army Worms will come to the surface where they can then be counted. An infestation of over 12 per square foot is considered severe and should be treated immediately.


Killing Army Worms will involve buying an appropriate insecticide from the local gardening store and applying it to the manufacturer's recommendations.
Next Post Prev Post